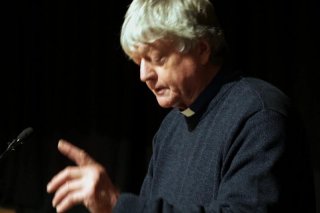 Good evening to everyone: I’ve something to say.
There was a terribly sad incident this year in May.
The deaths of two mothers from Royton, while they were collecting their daughters down Manchester way.
The scene at the Arena was dreadfully bad: something that made us all extremely sad.

Which gives us a reason for serious thought: and it’s that serious thinking I just want to start.

For Oldham’s a place that’s close to my heart.

And Oldham’s the place that belongs to us all. There’s been folk here for ages, I’d have you recall: we go back to’t Romans, to Vikings and Celts-I’ve ancestors that go back a long way myself.

There’ve been good times and bad times in my family story-but I’ll not tell you everythin’- ‘cos I don’t want to bore you. But I will give you one or two relevant facts.
My granddad-and his Dad-both worked at Platt’s: My grandma-his missus-worked in the mill. She were tough as owd boots and never were ill. If he had too much to drink then she locked him out-And made him stay t’night in the old outside loo!

Aye, you might well laugh, but that story’s true!

And another thing to say about them is this. They were all workin’ class and they were all Methodist. A don’t say they were perfect, but they went to the chapel and met other folk. They listened to’t sermon and then they would talk. They helped one another, were friendly and kind-a way of behaving’ we should still keep in mind!

And this I must mention-they first came from France: they’d been hand loom silk weavers-who just took a chance. They’d had lots of hassle for they were all Huguenots-so they crossed over the Channel and gave it a go.
Which I tell you just so you know-that we were once strangers who came from abroad. Aye-and so were us all: We’re all in’t same boat: And it’s now up to everyone to keep us afloat.

This is my reason for makin’ a fuss: The future of Owdham rests on all of us.

A’ve just bin readin’ Owdham’s Partnership Plan-which for its success needs every woman and man whose in here tonight to do what we can To challenge the bad things we know do go on.

To make sure the battle is steadily won-against racism, sexism-all kinds of abuse: Against hatred and terrorism that’s still on the loose.

So I ask you all to make this commitment tonight: As we all meet together at the Festival of Light. That where things are wrong, you’ll help put them right.
Whether you’re Muslim or Hindu, Christian or Jew:
Or whether you are-just simply You.

Commit yourself here and now, if you would: To do what you can for-

Which is the slogan of William Cobbett, Oldham’s first M.P.
A man who is still an inspiration for me.

The good of each one of us, the good of us all. The rich and the poor, the young and the old. Those with ancestors, those that are new. I’m talkin’ to everyone-not just to myself or to you.

The Interfaith Forum has brought us all here: it’s for the Forum I’m speaking, let me make that quite clear. It has reason for sadness, with which I began. And it wants peace and friendship wherever it can.